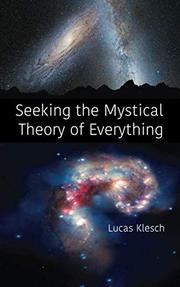 SEEKING THE MYSTICAL THEORY OF EVERYTHING

A poet with an eye to the climate crisis writes about grief and hope in a world that’s ending—but in a universe that’s just beginning.

Klesch (A Love Song for an Inked Doll, 2011, etc.) is an accomplished poet, but in his bio, he introduces himself first as a climate scientist. As such, he is alarmed by the rising seas, the warming atmosphere, and the looming threat of extinction. Accordingly, throughout his fourth verse volume, he can’t quite escape that threat’s darkening cloud. In the book’s first piece, he confronts it head-on, writing of “a dream abandoned / to entrepreneurial capitalism / the planet in climate crisis / a species ending existence / due to the greed / of a self centered populace.” But then comes a poignant shift in the last couplet: “If this is the end / could i spend it with you.” Throughout his volume’s first movement, Klesch bounces between these two themes: the sneaking sense that the apocalypse is upon us and the faint hope that the desperate warmth of human company might give some solace. But as the work goes on, the poet’s perspective subtly shifts, from the macroscopic to the microscopic and from the terrestrial to the universal. Both these moves are forecast in his dedication, which speaks of a belief that “we are all connected to each other on a quantum level”—and that this link lets our love spread “throughout all spacetime.” Hence, he asserts late in the book: “You play with powerful forces / when you communicate / experimentally / the quantum chemistry / of kite strings / invisible connections / throughout spacetime.”In the hands of a lesser writer, such cosmic reflections might sound absurd. But nothing could be further from the truth with Klesch, whose poetry is saved by his humility. He bows before the massive dangers that face readers and the grandeur of the universe that houses them—and then rises to greet both with curiosity and fortitude.

A sobering, inspiring volume of poetry with an ambitious scope.