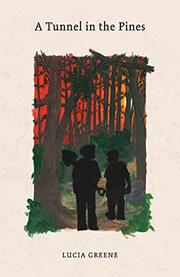 A TUNNEL IN THE PINES

During summer vacation, a boy faces difficult choices during a club initiation in Greene’s debut YA novel.

School is almost over, and narrator Wills and his best friend, Andrew Wyler, have plans for a new club called the Annelids, named after worms that Andrew finds interesting. The invitation list includes the boys’ closest friends, but inevitably, Wills’ older brother, Taylor, and Taylor’s friend Strat Sherwood find out about the club. They insist on being part of it, too, but they’re bullies who have a tendency to take things over. “Having Taylor involved in this club is not making my life any easier,” thinks Wills. At the first club meeting, Wills makes a suggestion for an initiation: “How about we dig a really deep tunnel and make like the worms do, join our powerful brothers underground?” Taylor and Strat seize on this idea, liking the thought of a bravery test to weed out the weak. The boys organize and carry out their plan, finding a good location in the pine woods, gathering tools and plywood, making scale drawings, and digging out stones and roots. During this process, Wills finds Andrew’s journal and discovers that his friend has severe asthma, but he keeps the secret, as his friend is already picked on enough. When the tunnel is complete, the initiation rites will test the boys’ courage and resourcefulness. Greene ably presents the contradictions and difficulties of growing up from a boy’s point of view. Wills and his friends are at an age when girls are still “others” and boys fear looking weak more than anything else in the world. Wills, however, is kind; noticing his mother’s laugh lines, he thinks, “It’s my mission to get her laughing as often as I can.” Still, pressure from the older, challenging boys gets to Wills; he has to admit that he’s been a jerk sometimes, that Andrew has reason not to trust him with the news of his diagnosis, and that maybe he’s become too much like his brother. The way that Wills navigates his competing instincts is realistic and moving.

A skillful exploration of a tween boy’s coming-of-age.