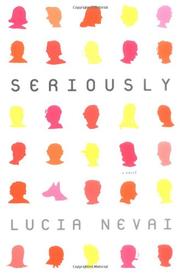 Certain moments have their allure, but most things are familiar in Nevai’s (Normal, stories, 1997) tales of small-town gossip, suspicion, and intrigue.

Tamara Johanssen fled to the little Dustin, New York, because—well, because her very crazy mother burned down the family house along with the family members unlucky enough to be in it, the two exceptions being Tamara herself (out on a date, sort of) and older sister Nora, who’d already fled the coop and headed off to become a rich and big-time TV producer. This rather operatic premise, however, recedes quickly into the background as Tamara describes life in little Dustin, where she opens an art gallery—with money from sister Nora—and then segues into life as a photographer. The book is presented as a novel but reads more like a “novel-in-stories” hybrid—not that there’s anything wrong with that, except that in Nevai’s case a sense of novelistic growth seems to have gone missing. Part of the problem is the near-obligatory and afternoon-soap feel of much of the material: the mean-spirited old codger who runs the post office; the good-hearted woman who has the coffee shop; the crazed-by-property-rights person who sits on her lawn with a shotgun on Halloween—and actually shoots it at Tamara as she approaches. Add in an arsonist, a neurasthenic lesbian entrepreneur, downtrodden wives, stalkers, the wannabe Faulknerian episode of the eccentric who dies in his trailer but nobody knows it, so that—anyway, with all these lives from a latter-day Spoon River or Winesburg, Ohio, crowding the canvas, not only does Tamara’s secret (for awhile) affair with the lawyer-husband of sister Nora’s bitchy college roommate glide away as if on the river of the forgotten, but so does the theme of mother-madness that putatively first set the book’s events originally into motion.

An earnest fictional effort that, in all, still seems to be searching for what it really wants to be about.