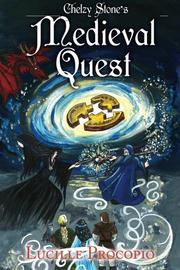 Procopio’s (Chelzy Stone’s Mystical Quest in the Lost and Found Game, 2013) middle-grade sequel brings the trio of adventurers to a medieval Camelot under threat.

Sixth-grader Tory Herold has an uncle who collects antiques. Uncle Tony’s latest find is a game stored in a beautiful chest. The seller tells him that it “will only open for a young person or someone on a quest for something extraordinary.” Tory and her friends Chelzy and Matthew Stone (who are in the 5th and 7th grades, respectively) wait a few weeks until spring break before opening it, expecting another otherworldly adventure. The chest reveals three smaller boxes, each engraved with a representation of a different element—water, light, and earth—and they soon discover that lifting the respective lids causes those elements to pour forth. The trio consults Grandpa Stone, who has helped them in the past. In medieval Albion, meanwhile, the sorceress Hextilda wreaks havoc in Camelot as revenge for her parents’ murders by the king. The wizard Azahti plans to recover the three pieces of the magical artifact called The Treskelion to defeat Hextilda. He has help from Sophokles, an owl, and Bianor, a dragon, but he also envisions the arrival of three children from “another existence” who will be instrumental to his cause. In this installment, Procopio’s heroes are hardly any older but quite a bit wiser when it comes to dealing with magical objects and situations. Still, the kids finish their homework and chores and get practical advice from Grandpa Stone (“Never start smoking and you’ll avoid health issues later in life”). The suspense of when and how the crew will travel to Camelot is amplified by the presence of Tory’s eccentric Aunt Flossy. Procopio’s prose is a vocabulary builder, as when Chelzy uses the word “concomitant,” to Matthew’s surprise. Later, in the Forest of Desperate Souls, Azahti eloquently tells the children about peace, saying, “Many living people have it right before them but do not recognize it or cherish it.” A crisp finale—and the hint of summer vacation shenanigans—prepares readers for a potential future volume.