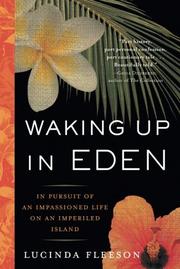 WAKING UP IN EDEN

In Pursuit of an Impassioned Life on an Imperiled Island

Journalist Fleeson fashions a new life for herself at a Hawaiian botanical garden.

When the bean counters took over the Philadelphia Inquirer, the author knew her days were numbered. She nipped a potential midlife crisis in the bud by accepting an out-of-the-blue job offer to become a fundraiser for the National Tropical Botanical Garden (NTBG) in Kauai, Hawaii. Gardening had always been a passion of hers, and here was a chance to make an impact. As her new boss and friend, colorfully irrepressible botanist Dr. Bill Klein, said, “It’s the nature of gardeners to take these disasters and improve on them.” He might have been speaking of Fleeson’s life, but he was actually referring to their task of getting the NTBG back on its feet after many moribund years and a devastating hurricane. Fleeson sets forth in appealingly bald language the events of her days: learning the ropes at work, delving into the history of the botanical garden, maintaining her love life, pursuing the island’s more telling stories. She downplays her emotions but doesn’t scant the intimacy of her role as participant, chronicling missteps aplenty while she negotiates her way through the cultural pitfalls of both her new job and Hawaiian society. Fleeson’s descriptive talents come to the fore as she summons the pungent dilapidation of her surroundings and the drama of the landscape, “a fertile universe, primordial and undisturbed.” She shows finesse in making vest-pocket stories of her investigations: the controversy over native vs. exotic species, Isabella Bird’s Hawaiian sojourn, the role of plate tectonics in Hawaii’s geology, profiles of the men whose estate became the NTBG and island biogeography and extinction. Additional subjects include death, politics and eating mangoes in the nude.

A surviving-middle-age story that artfully blends the intriguing world of natural science with the theater of human foibles.