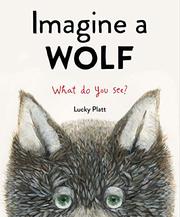 A wolf speaks directly to readers about preconceptions.

On an abstract black-and–dark-gray spread, white text makes a request: “Close your eyes and imagine a wolf.” Two spreads later, a wolf shows up and asks, “Am I what you imagined?” This wolf sits cross-legged and slope-shouldered, holding a knitting project. An apron and high-heeled slides with cork soles complete the harmless impression. The wolf’s gentle eyes are painted with complex irises and shifting colors. This is no fairy-tale predator—but other characters don’t notice that. On the sidewalk, pigs (three, natch) clutch one another in fear; in the yarn store, humans (one in a red knit cap) whisper and stare. A passing skateboarder screams “WOOOLF!”—terrifying the poor yarn-carrying wolf enough to cause a stumble and fall into the street. This wolf does have sharp teeth—an intense close-up leaves no doubt—but uses them only to “hold the wool while my paw spins the wheel.” The knitting project? Sweaters for chilly sheep. Part of Platt’s compassionate message is crystal clear: This kind wolf doesn’t deserve street harassment or being brought to tears by prejudice. However, this wolf’s tender inner character is symbolized by outward appearance: Readers see from first glimpse that this wolf isn’t dangerous, which undermines the attempted decoupling of appearance from morality. Human characters’ skin is the background paper’s creamy white.

Very dear, but the message’s delivery is only partially successful.