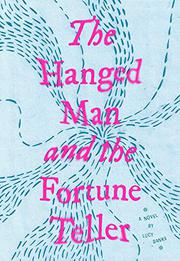 THE HANGED MAN AND THE FORTUNE TELLER

Two spirits wander London through the decades in search of memories in this atmospheric novel.

The ghost no longer remembers himself. He remembers love. He senses that he must find his wife. Beyond that, it’s a bit of a mystery. Flashes of memory rumble through every once in a while, but mostly he just has a feeling that there’s more he can’t grasp. He’s accompanied by another spirit, the Fortune Teller Agnes, who has a connection to him he cannot recall anymore. The two follow people they are drawn to, watching them live their lives as the chaos of the 20th and 21st centuries unfolds around them. The book opens in 2017, the two spirits attempting to fathom an internet cafe, but quickly the narrative splits. Told in alternating chapters in third and first person, the reader gets to witness the ghost’s time since his death as he watches London change through the eyes of its residents, the years slowly marching backward from 2017 to his death in the late 1800s. Meanwhile, the man the ghost once was narrates his life from his wedding day toward the ever imposing moment of his own passing. Banks (The Case of the Hidden Daemon, 2018, etc.) is a great wordsmith, creating interesting figures for the ghosts to observe as well as well-worn characters in both the spirit and the fortuneteller. Though the story itself never feels forced, there is an overreliance on surprising the reader, to the point that characters are painfully deliberate in not stating certain words or phrases even though the reader has probably picked up on the plot thread already. As a meditation on memory and moving on, it’s lovely. There’s no need for subterfuge.

A moody tale of ghosts and memory that will inspire reflection more than fear.