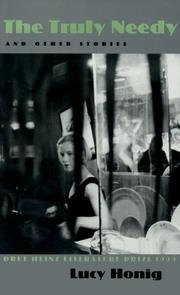 A debut collection of nine stories by novelist Honig (Picking Up, 1986), who was awarded the 1999 Drue Heinz Literature Prize for her efforts. Honig is not exactly a new writer, but her stories have that sketchy feel common to neophytes: a rough, I—m-not-really-sure- if-this-is-done-or-not tone that predominates in writing programs and is usually outgrown a few years after first publication. Many of the works here are quite literally sketches—portraits, that is, in which nothing much happens, rather than narratives of activity. “No Friends, All Strangers,” for example, portrays the life of a young woman working in a beauty parlor: she talks to her boss, rides the subway, wonders about the other passengers and their lives—and does little of interest overall. “English as a Second Language” offers a more conscious attempt to construct a narrative by showing the efforts of a young immigrant to collect the folk tales and personal histories of her classmates, but it neglects to give much insight into the woman’s own experiences. “Hilda” is a more standard coming-of-age story. Here, a young woman reconstructs the life of the elderly spinster aunt who became her close friend during childhood and now represents for her the passage of time and maturity. “Sights of Cork” differs markedly in style and tone from the other stories: it describes a trip to a little town in Ireland, taken together by a young American tourist who visits it for the first time and a mysterious stranger who has apparently spent some time fleeing from it. Understated and eerie, it’s the best here, far superior to the title story, which is part of a quartet portraying the home lives of several women who work together in a social services agency in New York. As in many first collections, the phrases are sharp, the sentences firm, the paragraphs taut—but they don—t add up to much in the way of stories.