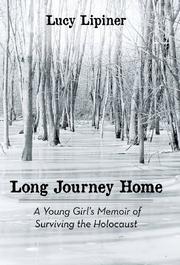 As World War II breaks out in Poland, a Jewish family travels east in this memoir of survival.

Holocaust memoirs are a crowded field, but few tell the story of escape via Siberia and Tajikistan. Lipiner, in her debut work, describes how her father’s foresight, planning and resourcefulness saved the lives of 15 people. In the summer of 1939, Lipiner was 6 years old and enjoyed playing with her older sister Frydzia and cousins in quaint little Sucha Beskidzka, Poland. When the war broke out, her father, who was aware of the Nazis’ hatred of Jews, was ready: “Because he had sensed that the war was imminent, he had been planning our escape even before the war started.” He persuaded three generations—his own family and those of his two sisters, 15 people in all—to head toward Soviet-occupied eastern Poland, where Soviets eventually transported Jews to a labor camp in Siberia. When allowed to leave, the clan—led by Lipiner’s father—once again packed up, arriving at last in Leninabad, Tajikistan. To survive, they depended on the small Jewish community’s generosity. Hunger, cold and infectious disease besieged them, but the family survived. Through many difficulties, separations and turns of fortune in the chaos of postwar Europe, the family found a final refuge in America. Lipiner writes well from a child’s perspective: Cold and hungry in Siberia, she and her sister found magic in the frost flowers on the windows. While noting much great generosity, she also acknowledges the peevishness and despair that hardship can bring. Her father’s “intelligence, common sense, and gumption,” illustrated with many examples, is set compassionately against her mother’s crushed spirit. With such an emotional story to tell, it would have been easy to slide into pathos, but the author controls her tone well. A small anecdote about her father’s characteristic resourcefulness in putting together scrip to buy his worried daughter a chocolate bar depicts perfectly how he expressed love in deeds, not words: a beautiful miniature of what the entire book portrays.

A cleareyed, moving memoir that increases understanding of a lesser-known Holocaust escape route and its trials.