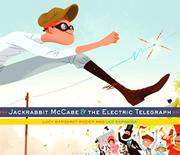 JACKRABBIT MCCABE AND THE ELECTRIC TELEGRAPH

This original tall tale is literally up to speed.

Jackrabbit McCabe is the fastest man in Windy Flats, a mid-19th-century town. With legs that are preternaturally long, Jackrabbit races everything, human, animal, and mechanical—and wins every time. His neighbors rely on him to deliver messages with lightning speed. Then fate, in the guise of a new invention called the telegraph, rushes in. Everyone in Windy Flats scoffs at the idea that “any newfangled contraption” is faster than their man, and he eagerly takes up the challenge to “race” against it. For kids it won’t be a foregone conclusion that the electrical device proves faster than any pair of human legs, yet for the first time, Jackrabbit must admit defeat. Happily, a logical ending is in store: our speedy hero models good sportsmanship by accepting loss gracefully, and he eagerly becomes the town’s telegraph operator and newspaper deliverer. Naturally, he fulfills his duties remarkably quickly. Readers will find that the story, written in folksy terms and rhythms, clips along at a fast pace, too, and the fittingly retro illustrations are filled with action, energy, and good humor. Occasional changes in typeface and size add to the excitement of the telling. The backmatter includes a helpful historical author’s note, a Morse code key, and a riddle in Morse code for readers to solve.

Good, quick-moving fun. Kids may marvel that communication existed before the telephone and Internet.