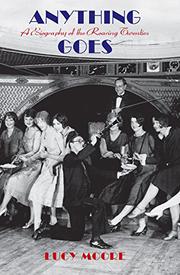 A Biography of the Roaring Twenties

Moore (Liberty: The Lives and Times of Six Women in Revolutionary France, 2007, etc.) delivers a fast-paced portrait of the 20th-century’s fizziest decade, replete with gangsters, flappers, speakeasies and jazz.

The author’s breezy style synchs nicely with her subject matter, and her focus on the personalities behind the history keeps the narrative engaging. Rather than presenting her material as an extended survey of the period, Moore focuses on a single Jazz Age trope per chapter, resulting in easily digestible takes on prohibition and the high-spirited criminal culture it engendered; the explosion in popularity of jazz music; the evolution of the flapper; the emergence of Hollywood as creator of a national cultural consciousness; the financial scandals of the Harding presidency; the Sacco/Vanzetti and Scopes trials; the resurgence of the Ku Klux Klan; the Algonquin round table and the founding of the New Yorker; Charles Lindbergh’s historic trans-Atlantic flight; the spectacular boxing career of Jack Dempsey; and the financial devastation of the Wall Street crash that ended the party and ushered in the Great Depression. The author writes more like a novelist than a historian, richly delineating her characters and their milieu. Harding is revealed as a hapless, good-time Charlie hopelessly out of his element as president; Scott and Zelda Fitzgerald, beautiful and damned, drink their way across Europe; blues legend Bessie Smith lives large and brooks no fools; and communist anarchists Sacco and Vanzetti emerge as principled, quietly noble figures, unrepentant in the face of a likely gross miscarriage of justice. Moore draws some fairly obvious parallels between the ’20s and our contemporary moment—the Wall Street crash, Bush as Harding redux, the gap between emerging technologies and social structures, the cult of celebrity—but the point isn’t labored and the fizzing pace never flags.