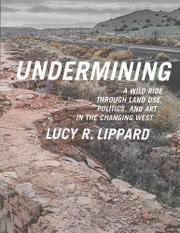 Many of Lippard’s books are a blend of discourse and art installation, at least after a fashion. This is no exception: On each page, a band of images speaks to the text below. That text, in turn, begins with an intensely local concern, namely, a gravel pit near her high desert home. Strap on postmodern headgear: “Gravel pits,” writes the author, “provide a dialectical take on the relationship between my own three-and-a-half decades in the Lower Manhattan activist/avant-garde art community and two decades in Galisteo—a tiny New Mexico village (population 250).” Though the text is often self-indulgent along those lines, Lippard allows that just about everywhere you look in the Southwest, you’ll find someone extracting something from the Earth, and that someone may be ever so slightly better, morally speaking, than the next someone. There are gravel pits, and then there are mines, including “the world’s largest surface coal mine complex” in eastern Wyoming. From mines, with transitions that are a little jagged, Lippard moves on to the Earth artists of the West, such as Robert Smithson and James Turrell. Though the connections are not always clear, her eventual meditation on the cairn marking the Trinity nuclear site puts us back on the road from piled stones to stones in gravel pits, and if the conversation is absent-minded, it is nicely suggestive of things worth thinking about, such as the remnants of 9/11 that now lie buried in the Fresh Kills landfill of Staten Island. Art, garbage, history? Readers must be the judges.

Centrifugal and sometimes hard to follow but always interesting, tracing the intersection of art, the environment, geography and politics.