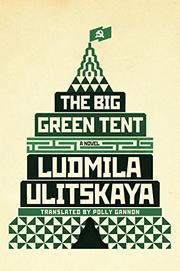 A sweeping novel of life in the Cold War Soviet Union, with plenty between the lines about life in Putin’s Russia today.

With only a dozen or so major characters, Ulitskaya’s (Sonechka, 2005, etc.) latest doesn’t threaten to rival War and Peace or The Possessed on the dramatis personae front. Still, it obviously harbors epic intentions and ambitions, spanning years and lifetimes and treating the largest possible themes. The latter include some of the most classic questions of all: the nature of love, the value of friendship, and, inevitably, the sorrow of betrayal. The early part of the story is set in the tumultuous years following the death of Josef Stalin (which, Ulitskaya notes with quiet satisfaction, occurred on Purim), when three schoolboys bond in friendship. Nerdy and bookish, they are playground victims, despised as outcasts and outsiders precisely “due to their complete disinclination to fight or be cruel.” As the three grow into manhood, they struggle against the odds to remain more or less pure of heart even as Soviet society enters into a new era of anti-Semitism and oppression—for though Stalin is dead, his machinery of terror lives on. Still outsiders, Ilya, Sanya, and Mikha are artists, intellectuals, dissidents. If Mikha begins with the most promise, not only blessed with an endlessly curious mind, but also “possessed of an inchoate creative fire,” the others are brilliant, too. Among many other things, Ulitskaya’s novel is also about the power of books, writing, and music to shape lives worth living. But more, it is about what happens to people inside a prison society: denunciations, hardship, and punishment ensue as surely as night follows day. The novel is impressively vast in scope and commodious in shape; still, reading of, say, Ilya’s love for the resonant Olga, “with her slightly chapped lips, her pale freckles sprinkled over her white skin, the center of his life,” one wants more.

Indeed, the greatest tragedy of Ulitskaya’s story is that it comes to an end. Worthy of shelving alongside Doctor Zhivago: memorable and moving.