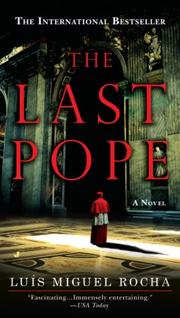 The mysterious death of Pope John Paul I and the evil machinations of real-life figures from Vatican bank scandals enmesh a pretty Portuguese reporter and her mysterious defender.

Crowds of cynical cardinals, malevolent archbishops and grasping members of the shadowy Italian Masonic lodge P2 complicate the time-skipping plot of this thriller debut by Portuguese TV and film writer Rocha. His attempt to sort out the unanswered questions raised by the London murder of banker Roberto Calvi and the brief papacy of Albino Luciani skips back and forth between the pope’s last days in the 1970s and the present. Lovely international reporter Sarah Monteiro arrives in London to find in her pile of mail an envelope stuffed with an unexplained list of names, including her father’s. The list was sent by a Vatican prelate who swiped it from the archives and slipped it in the mailbox seconds before being iced by an assassin with the run of St. Peters. The killer is an operative reporting to the cabal of highly placed government, church and business figures whose Masonic alliance has allowed them to swindle and bamboozle their way to riches and political power. In their unholy work, they had and continue to have the wholehearted assistance of the CIA, which lends invaluable technical assistance to their manic effort to regain the purloined information and keep it from the public. The late pope had learned about the shady financial dealings of Paul VI’s American advisor, Archbishop Paul Marcinkus, and had been planning to clean house. As soon as Sarah reads the list, more bodies drop, and they continue to drop as she sorts things out with the help of a handsome turncoat agent with a mysterious past.

The novel, an international bestseller, is nearly as messy as the actual bank scandal it draws on.