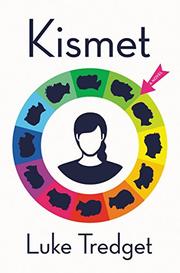 In this age of data insecurity, the premise of Tredget’s first novel is highly topical.

A dating app called Kismet identifies ideal matches, on a scale of one to 100, based on the internet profiles people build up through online activity. Since users can’t easily manipulate their profiles, Kismet scores can’t be inflated. So when Anna, already cohabiting with Pete—ranked 70 for her—has a chance meeting with her highest score to date, Geoff, an 81, what’s an almost-engaged, on-the-cusp-of-turning-30, beleaguered magazine writer to do? Once this intriguing hook is cast, the novel’s execution slackens. The main driver of suspense is the question of whom Anna ends up with. On the way to a conclusion that, to the author’s credit, is far from foregone, there are many segments whose sole functions seem to be expanding material that could have been dispatched in a novella to 400 pages. Anna’s extended birthday celebration is a case in point: At a pub session followed by a dinner party, Anna and her friends relate rambling and none-too-scintillating anecdotes almost in real time. Her character is assembled like a recipe: Mix two parts creative inventiveness with one part recently diagnosed depression and a dash of recent bereavement, then bake in a convection oven swirling with premature midlife dread. Still, Anna’s crises are refreshingly non–gender specific. She intends to control her own destiny irrespective of whom she’s paired with and takes the blame for her own bad decisions. In one scene that readers burned out with angst-ridden heroines like the one in the New Yorker story "Cat Person" will appreciate, she gets herself into a potentially compromising position with a date and then decides not to sleep with him because “she just doesn’t want to.” Tredget is obviously in tune with the travesties wrought, and ethical quandaries posed, by corporate-controlled media: His protagonist’s work debacles amply illustrate the increasingly blurred lines between journalism and advertising.

Despite some missteps, a thought-provoking debut.