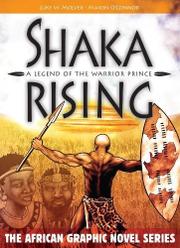 A Legend of the Warrior Prince

Shaka Zulu rises to power amid great regional turmoil to defend his people against the tide of the expanding European-backed slave trade.

Gogo, an elder, opens by announcing that the story of Shaka is the “story that is part of all of our stories…it is in the clay of our homes…in our blood and our bones.” In this series opener, Shaka, the son of Zulu chief Senzanghakona, struggles with his brother Sigujana over the succession and is eventually forced into exile. Shaka recovers under the leadership of northern neighbor King Dingiswayo, and his skills in battle earn him the reputation of a wise and accomplished warrior. Yet as tribes vie to control new territories and imprison soldiers for eventual European trade, he recognizes that he must return home and assume his responsibility to lead the Zulu. This graphic novel admirably allows its hero to retain flaws and scars that keep him squarely in the realm of the human. Molver’s clean panels also emphasize this, advancing the story in well-paced sequences that balance action with calm. In an era when the stories of colonial exploitation and European enslavement overdetermine how global audiences encounter African stories, Molver and O’Connor forthrightly center this tale on the struggles among the indigenous tribes and nations as they seek to maintain their lands and lifeways while still acknowledging that they, too, have a confluence with the “dark days.” Several pages of backmatter offer historical and cultural context, a glossary, discussion questions, and a pronunciation guide.

A worthy introduction that offers a young Anglophone audience entry into a legend of Africa without the annoyance of overtranslation and with refreshingly three-dimensional characters.