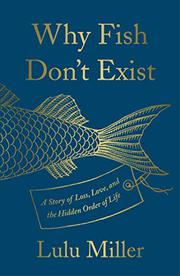 A Story of Loss, Love, and the Hidden Order of Life

A Peabody Award–winning NPR science reporter chronicles the life of a turn-of-the-century scientist and how her quest led to significant revelations about the meaning of order, chaos, and her own existence.

Miller began doing research on David Starr Jordan (1851-1931) to understand how he had managed to carry on after the 1906 San Francisco earthquake destroyed his work. A taxonomist who is credited with discovering “a full fifth of fish known to man in his day,” Jordan had amassed an unparalleled collection of ichthyological specimens. Gathering up all the fish he could save, Jordan sewed the nameplates that had been on the destroyed jars directly onto the fish. His perseverance intrigued the author, who also discusses the struggles she underwent after her affair with a woman ended a heterosexual relationship. Born into an upstate New York farm family, Jordan attended Cornell and then became an itinerant scholar and field researcher until he landed at Indiana University, where his first ichthyological collection was destroyed by lightning. In between this catastrophe and others involving family members’ deaths, he reconstructed his collection. Later, he was appointed as the founding president of Stanford, where he evolved into a Machiavellian figure who trampled on colleagues and sang the praises of eugenics. Miller concludes that Jordan displayed the characteristics of someone who relied on “positive illusions” to rebound from disaster and that his stand on eugenics came from a belief in “a divine hierarchy from bacteria to humans that point[ed]…toward better.” Considering recent research that negates biological hierarchies, the author then suggests that Jordan’s beloved taxonomic category—fish—does not exist. Part biography, part science report, and part meditation on how the chaos that caused Miller’s existential misery could also bring self-acceptance and a loving wife, this unique book is an ingenious celebration of diversity and the mysterious order that underlies all existence.

A quirky wonder of a book.