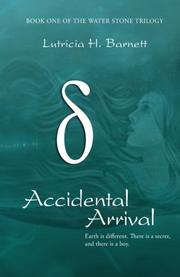 From the The Water Stone Triology series, volume 1

In this YA fantasy novel, a teenage girl unexpectedly travels to another planet, where she learns that Earth may soon join an intergalactic coalition.

When Emily Harrison was just a few years old, Earth discovered the secret of “water travel”: an instantaneous journey via molecule rearrangement to anywhere that has flowing water. Now, 17-year-old Emily, in turmoil over her parents’ divorce and just wanting to get away, takes a lake dip that somehow lands her on another planet called Arden. The friendly inhabitants’ mission is to help planets like Earth “technologically and artistically prepare for mergence with The Accordance,” the intergalactic governing body. There’s much that intrigues Emily about Arden, which has highly developed technology but a quaint appearance: “sunlit lanes nestled between the cottage-style shops draped in lush foliage from the surrounding trees.” Especially intriguing is Lachlan Belean Elgin, the brother of Emily’s new friend, DeRenne. He’s a handsome, emotionally guarded young man with heavy responsibilities. Emily feels self-conscious and wrong-footed around Lachlan, even when he becomes romantic. As a result, Emily again acts impulsively around a body of water after some emotional turmoil, which gets her in more trouble—but it could also, with the help of her friends, aid The Accordance and thwart a traitor. In her debut novel, Barnett employs many tropes that are standard to YA fantasy: a portal to another world; an insecure heroine with a special role to play who can’t imagine why the uncommunicative hero would be interested in her; and wish-fulfillment details, such as fancy clothes. Still, Barnett marshals some imaginative back story regarding history and politics, describes nifty alien inventions (including wallpaper woven with light-emitting “nanoprisms”), and gives sufficiently scientific-ish explanations for miracles such as water travel, which help bolster the book. The plot moves along well, giving Emily a chance to grow as a character, and her voice is lively and amusing. The romance, though, doesn’t offer much beyond dramatic high school emotions: “How did it get to this level so quickly?” Emily asks herself—a good question that the book doesn’t really answer.

An engaging narrative voice and thoughtful back story add depth to a fairly standard portal-adventure plot.