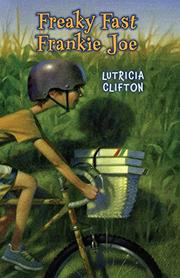 While his mom is in jail, Frankie Joe tries to adjust to living with his newly surfaced father, FJ, his stepmother and “the four legitimate Huckaby sons.”

The brothers tease Frankie Joe because, academically, he is “freaky slow,” which is at odds with how fast he is when he runs or bikes. The tension and the cast of characters are well-developed, especially Frankie Joe, who is believably resistant to the new setting and the rules of the house. Speaking in the first-person, Frankie Joe shows spunk, spinning the taunt into a positive when he launches Frankie Joe’s Freaky Fast Delivery Service. With his income, he plans his escape back home from Illinois to Texas. But with each day Frankie Joe becomes more integrated into—and essential to—the town and the family, starting with his friendship with another town oddball, elderly Miss Peachcott. She tells Frankie Joe his family history. With this reveal, the author realistically depicts Frankie Joe’s growing doubts about his mother’s decisions. His mother’s final act, abandoning him to FJ, leaves Frankie Joe grief-stricken and depressed but he now has a new understanding of what responsibility and home mean.

The pace in this debut is leisurely, but readers, like the town folk and his newfound family, will be rooting for Frankie Joe. The final scenes soar with hope.