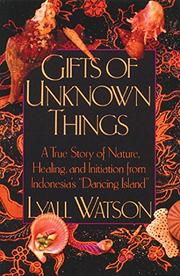 A British biologist's rich but far-fetched telling of his initiation into a world of ""natural knowledge"" on a volcanic Indonesian island. It reads like a Castaneda-style novel, blending real experiences, scientific fact and theory, and illustrative fancy into a heady South Sea cocktail. The tale's protagonists have the mythical names Tiamat and Marduk, and what plot there is involves their struggle to control the community: Tia, the heroine (an orphan with magical powers), representing the forces of natural religion with Marduk, the heavy, embodying the constraints of civilization (specifically, Islam). But mostly the book jumps from one miraculous episode to another--about extraordinary powers (knowing the colors of sounds, extrasensory perception, precognition, psychic healing), magical dances, sacred stones, power spots, communicating fish, and even a resurrection. Watson wants to show the deep interconnectedness of things--of the cosmos, the natural world, and man--and the existence of a universal harmony that largely escapes the grasp of conventional science but is revealed in primitive traditions and exploited by shamans, adepts, geomancers, etc. He makes much of the hologram principle--that each point in space and in time contains information about the whole--and tries to corroborate primitive beliefs and practices with recent scientific findings. His book is really a teaching story, urging us literally to come to our senses and, in his terms, to turn on our whole body and tune in to the entire spectrum of information the world sends out. There is plenty to raise an eyebrow at here, but with some suspension of disbelief, one might gain from it an enhanced sense of the world's mysteries and of the untapped reservoirs of human sensitivity and will. Trippy.