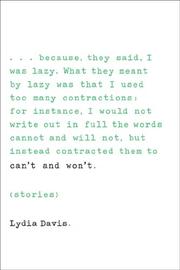 Five years after a mammoth, comprehensive collection of stories secured her literary legacy, this unique author explores new directions and blurs boundaries in writing that is always fresh and often funny.

For one of the country’s most critically acclaimed writers (The Collected Stories of Lydia Davis, 2009), a new collection is like a box of chocolates, one in which—as she writes in “A Small Story About a Small Box of Chocolates”—a single piece can be “very good, rich and bitter, sweet and strange at the same time” and can feed “a vague, indefinite hunger, not necessarily for food.” As previously, her shortest stories—a single sentence or paragraph, well less than a page—could often pass as the prose equivalent of a haiku or Zen koan, and elements such as character development, or even characters, are often conspicuous in their absence. The narrative voice has a consistency of tone throughout much of the collection: conversational, intelligent, by no means opaque or impenetrable like much postmodern fiction. It flows easily from dreams to conscious reflection, often about words themselves or “Writing” (the title of one very short story) or reading, ruminations that may or may not be the author’s own. As the relationship between writer and reader becomes more familiar, one gets a sense of a narrative character and of what's important to that character (grammar, concision, precision) and how she spends her time (in academe, on various modes of transportation, among animals in the country). Some stories are based on the letters of Flaubert (whom Davis has translated, along with Proust and others), while others are unsigned (and unsent?) letters to various companies and boards, comments and complaints that often themselves turn into stories. In “Not Interested,” the narrator explains, “I’m not interested in reading this book. I was not interested in reading the last one I tried, either....The books I’m talking about are supposed to be reasonably good, but they simply don’t interest me....These days, I prefer books that contain something real, or something the author at least believed to be real. I don’t want to be bored by someone else’s imagination.”