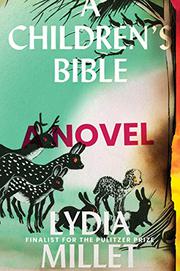 A group of children are forced to fend for themselves in the face of rising sea levels, worsening storms, and willfully ignorant parents.

This somber novel by Millet (Fight No More, 2018, etc.) is a Lord of the Flies–style tale with a climate-fiction twist. Evie, the narrator, is one of a group of kids and teenagers spending a summer with their parents at a lakeside rental mansion that’s pitched as a vacation retreat but increasingly feels like a bulwark against increasingly intense weather on the coasts. The parents’ chief activity involves stockpiling alcohol, leaving their children to explore the area. When a massive storm hits, the parents double down on self-medicating (“during the night the older generation had dosed itself with Ecstasy”) while the kids explore further, ultimately arriving at a farm that’s well stocked, at least for a while. The novel takes some time to find its footing, introducing a host of characters who are initially difficult to differentiate, but it ultimately settles on Evie and her rising fury at the grown-ups’ incapacity to rise to a challenge and her younger brother, Jack, who’s become increasingly obsessed with a Bible he’s received and whether it can serve as a climate change survival handbook. (At one point he attempts to gather up animals, Noah-like.) Millet’s allegorical messages are simple: The next generation will have to clean up (or endure) the climate mess prior ones created, and any notion that we can simply spend our way to higher ground is a delusion. Millet presses that last point in the novel’s latter pages as the brief peace of the farm is disrupted in often horrific fashion. In the process, Jack’s Bible plays an allegorical role too: Can we maintain civilization as we know it when the world descends into Old Testament–style chaos?

A bleak and righteously angry tale determined to challenge our rationalizations about climate change.