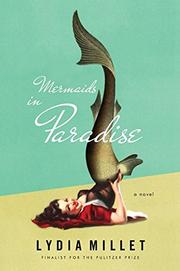 A Caribbean honeymoon turns into a media circus over a mermaid sighting in this laser-focused satire from Millet (Magnificence, 2012, etc.).

Deborah, the narrator of Millet’s smart and funny novel, her ninth, is an LA woman who’s snarky to the core: She’s skeptical of her fiance’s hard-core workout regimen, of the rituals of bachelorette parties, even of her best friend’s own snark. So when her new husband, Chip, proposes a honeymoon in the British Virgin Islands, she’s suspicious of tourism’s virtues. Deb’s early interactions seem to justify her defensiveness: One man gets the wrong idea when she accidentally brushes her foot against his leg over drinks: “He made me feel like my toes were prostitutes,” she tells her husband. “Like my toes, Chip, were dolled up in Frederick’s of Hollywood.” The comic, unbelieving tone Millet gives Deb helps sell what happens next: Roped into a scuba dive by an aquatic researcher, she and a small group spot a bunch of mermaids at a nearby reef. Despite the group’s efforts to keep the discovery hidden, the resort gets the news and rushes to capitalize on it, while Deb and her cohorts are eager to preserve the sole example of unadulterated wonder the 21st century has offered them. The novel has the shape and pace of a thriller—Deb is held by corporate goons, the researcher goes mysteriously missing, paramilitary men are called in—and it thrives on Deb’s witty, wise narration. Millet means to criticize a rapacious culture that wants to simplify and categorize everything, from the resort profiteers to churchy types who see the mermaids as symbols of godlessness. The ending underscores the consequences of such blinkered mindsets without losing its essential comedy.

An admirable example of a funny novel with a serious message that works swimmingly. Dive in.