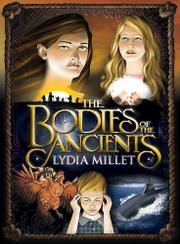 THE BODIES OF THE ANCIENTS

From the Dissenters series, volume 3

Children, adults, and myriad creatures fight the final battle in a war over climate change.

The Cold One, an obscure being living under the ocean, has spent centuries both piggybacking on and masterminding global warming so he can colonize the Earth’s surface (The Shimmers in the Night, 2012). Fighting against him are fantastical creatures ancient and modern, a handful of white kids from Cape Cod, and a mother who’s a shape shifter (otter, bear, marine biologist) and “part of an ancient culture with its own secret knowledge.” This ancient knowledge is vast: genius youngest sibling Jax—a Charles Wallace Murry type—can control others, read minds, and enter the internet with his mind; sister Cara sees places from afar. None of this “old way technology” is explained, just used; genrewise, the book completely fuses science fiction with fantasy. Action moves between a Boston technological institute/refuge and the open Atlantic for battles. The Cold One takes control of a U.S. Navy submarine to discharge a nuclear missile, which brings narrative urgency and desperation; however, the question of climate change aside from what might be wrought by that imminent nuclear explosion fades, oddly, weakening the eco-fantasy thrust. Pacing is dense, rushed back stories feel inorganic, and characterizations are loose—but relationships are tender.

Memorably unusual but haphazard; the series peaked with its opener, The Fires Beneath the Sea (2011).