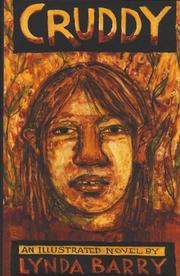 The only thing this gritty debut novel shares with Barry’s work as a narrative cartoonist is its point of view: told by a 16- year-old girl, the bloody and violent story is tougher and uglier than any of the artist’s previous work. And riveting as well. The title reflects Roberta Rohbeson’s view of her world, and she’s more than justified in her anger: she lives in a cruddy house in a cruddy neighborhood in a cruddy town, with her annoying younger sister and her angry single Mom. The genuinely horrific tale, though, is spliced in with flashbacks. When she’s 11, Roberta’s parents split up; her mother hides her in the backseat of her father’s car, so she ends up joining him on a road trip that grows increasingly creepier. Expecting to inherit his father’s slaughterhouse, Ray Rohbeson came up empty when the old man committed suicide and gave whatever was left to his debtors. But Ray is determined to get what’s his, and young Roberta witnesses a number of gruesome murders. Posing as Ray’s son “Clyde,” Roberta feigns dumbness—both at her father’s urging. He’s a lying, thieving, smooth-talker who teaches his kid how to smoke, use butcher knives, and dull the pain with flat pints of Old Skull Popper. The background story comes to a head with one scene more Texas Chainsaw than the next: Roberta and Daddy move in with a family that disposes of dead mob bodies at their slaughterhouse; then they all take off for a weird motel out in the sci-fi desert of Nevada, where Roberta’s the only survivor of yet another bloody slice and dice. Five years later, in 1971, Roberta enjoys her first mescaline, her first sex, and her first friends, most of whom seem suicidal misfits like herself. The author of Ernie Pook’s Comeek and The Freddie Stories can get down and dirty with the best hard-edged writers like Larry Brown or Daniel Woodrell, all from the unlikely (and welcome) perspective of a young woman.