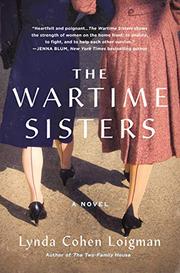 Loigman’s second novel portrays a sampling of the women whose roles were pivotal during the wartime manufacturing boom. Lillian is the wife of Patrick, commanding officer of the Springfield Armory. Her family life is happy but always overshadowed by memories of childhood abuse by a cruel, martinet father. Arietta, an Italian-American from a vaudeville background, works as a cook in the local cafeteria, where she also belts out numbers to great acclaim. Millie, a war widow, works in the arms factory. She and her toddler son, Michael, live with her sister, Ruth, who works in payroll and is married to Arthur, a top armory scientist. The novel focuses primarily on Millie and Ruth, bracketing their particular sibling rivalry with the sisterhood of women at war. But Loigman’s main preoccupation, conveyed with unsparing candor in extended flashbacks, is with the drastically disparate treatment, by their parents and everyone around them, of Ruth and Millie. In their 1930s Brooklyn Jewish household, youngest daughter Millie, with her red hair and blue eyes, is compared and judged superior to firstborn Ruth, whose appearance, though not described beyond “straight hair” and “brown eyes,” does not measure up. The pattern continues as the girls mature: Ruth’s academic achievements are discounted, her perfectionism is taken for granted, and her dates are diverted by her sister. Millie, however, seems directionless and confused. Her first serious boyfriend, future husband Lenny, is dubbed “the Bum” by her mother. So desperate is Ruth to escape the eternal comparisons that she marries Arthur and is overjoyed to be relocated to backwater Springfield. The parents’ influence is so far-reaching and invasive that their sudden deaths in a car accident are a necessary authorial expedient to let the plot breathe. The stark, painful depiction of “looks-ism,” 1930s style, undercuts the anodyne message of the novel’s resolution.

Though it highlights historic advances for women, this book is really about gender discrimination in the home.