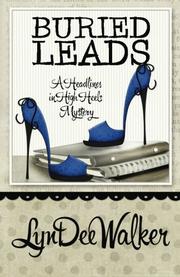 A newspaper reporter catches a lead on what could be a politically charged crime ring.

Nichelle Clarke, of the Richmond Telegraph, is best known for two trademarks: her towering Manolos and her tenacity in chasing a story. When her closest sidekick, her trusty police scanner, alerts her to the report of a body, she doesn’t let the lack of an official invitation keep her from making herself at home at the crime scene. Daniel Amesworth, a lobbyist—and a successful one, according to his Armani shoes—has been both bashed over the head and shot by someone who clearly wanted to make sure he was dead. When the police pick up James Billings, Nichelle’s fairly certain they’ve got the wrong guy. It’s not so much that she’s convinced Billings is innocent as that she has continuing issues with her long-ago ex, Kyle Miller, the so-called supercop of the Bureau of Alcohol, Tobacco, Firearms and Explosives, who’s keen on Billings as the murderer. Whether it’s because she’s determined to prove Kyle wrong or because she wants to scoop her nemesis Charlie, Nichelle fixates on the case and what she suspects may be a whole related series of local crimes. Though she’s warned away by the enigmatic Joey, whose moblike ties both terrify and compel her, Nichelle won’t stop her snooping, even when her trail leads her ever closer to the popular Sen. Grayson.

Walker (Front Page Fatality, 2013) walks her readers through a series of plausible scenarios, though less murder and more drama might give her a better shot at her intended audience.