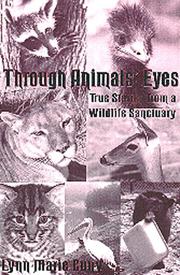 True Stories from a Wildlife Sanctuary

Inmate stories from an animal rescue sanctuary, heartening but also scolding and righteous, from sanctuary director Cuny. Wildlife Rescue and Rehabilitation, founded in Texas 20 years ago by Cuny, tends for and hopefully returns to the wild “injured, orphaned, abused and displaced wild animals.” If the injuries are severe enough, the animals stay at the sanctuary for the rest of their lives. It is a rare and profoundly humanitarian operation, and one certainly deserving of our appreciation. Cuny includes here 31 vignettes of animals or animal groups that have found their way, for the short or long term, to the sanctuary. They are almost all animals victimized by human malfeasance, with Cuny charging in to save the creature and the day. Of the 5,000 animals the sanctuary ministers to annually, a few are exotics—macaques and bobcats and mountain lions—but by far the greatest number are raccoons, ducks, birds, fox, deer, coyote, even mice; all are welcome, from squirrel to timber wolf. All have a story, of being tormented in roadside zoos, caught in steel-jaw traps and fishing lines, rescues from the trade in unusual animals and from research institutions; and all exhibit a wonderful will to live. Unfortunately, Cuny’s writing is schmaltzy and frequently over the top, as when she refers to one cat as “this beautiful animal, this precious, mysterious, secretive, misunderstood, irreplaceable and majestic cat.” Even worse, her tone exudes a pious superiority (“I was willing to do whatever it took”; “I returned faithfully each night”); it isn’t long before readers inexplicably begins to sense a guilty finger being pointed in their direction. There is an annoying aura of self-promotion at play, which detracts from the good deeds and alienates those who otherwise might have been inspired by the sanctuary’s achievements. (88 b&w photos, not seen) (Book-of-the-Month Club/Quality Paperback Book Club selection)