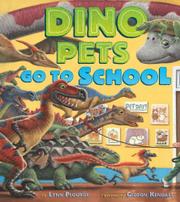 The little boy from Dino Pets (2007) finally gets to show his menagerie off to his class, but will school ever be the same again?

Plourde’s playful verse follows the little boy as he repeatedly attempts to bring just the right dinosaur to school for pet day. But the tallest dino wrecks the bus, the widest crushes the lunchroom table, the smartest eats all the math tests and the spikiest? “At recess time / we played a game. / Our soccer balls / were not the same.” A final spread of dinosaur facts describes the dinosaur that fits each superlative and explains that what scientists know about these prehistoric creatures changes with new discoveries and findings. For teachers, this holds lots of spark for a creative-writing lesson…and a cautionary warning against holding a classroom pet day. Kendall’s artwork glows with deadpan realism, taking this imaginative tale to a whole new dimension. Watching the little boy’s pride turn to chagrin as each successive pet causes mayhem and destruction is as much fun as the chaos itself.

Readers will delight in this latest dino pets installment and wonder where the dinosaurs might go for their next calamitous adventure.