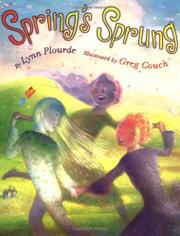 The spring season gets a treatment of its own, following autumn (Wild Child, 1999) and winter (Winter Waits, 2001) from the same author/illustrator team. As before, the verse and illustrations personify the seasonal players. In this case, Mother Earth wakes her daughters, the spring sisters of March, April, and May, saying, “You must wake the world / to start a new day.” At the end, they must wake one more: summer. But before they awaken anyone, the three girls bicker and vie for first place in Mother Earth’s affections. After she affirms “I love you ALL the best,” the daughters are ready to wake the earth and “Spring’s Sprung! / A new day’s begun.” The insouciant mixing of months, seasons, and days may not bother preschoolers, but adults may notice. Nonetheless, the tone is lighthearted and fresh, appropriate to its season. Illustrations, as in the previous books, are liquid acrylic and colored pencil on museum board. Mother Earth’s form emerges from the earth’s topography while the daughters are portrayed as free-standing girls with many visual allusions to their physical ties to the earth, such as hair that flows into a river or curls into mounds of bushes. The colors are pastel, and there is much that is a fresh, new green. Touches of flowers and familiar mother-and-baby animals (such as bunnies and ducks) dot the backgrounds. There is a distinct New Age flavor to both story and illustrations. The large, vertical format is equally suitable for storytime or individual readings. (Picture book. 4-8)