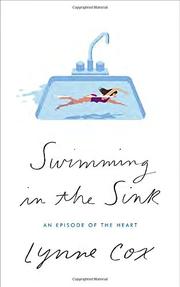 SWIMMING IN THE SINK

An Episode of the Heart

An open water swimmer’s memoir about how she survived a traumatic year marred by heartbreak and a life-threatening health crisis.

Born covered in hair that made her look like “a little seal” and possessed of the remarkable ability to acclimatize easily to cold, often freezing water, Cox (Open Water Swimming Manual: An Expert's Survival Guide for Triathletes and Open Water Swimmers, 2013, etc.) seemed destined for the aquatic pursuits that defined her later life. As an adult, she successfully swam across the Bering Strait, the Beagle Channel, Disko Bay, and Lake Titicaca and became an unofficial goodwill ambassador between nations. Her metabolism was so efficient that she became the subject of numerous medical studies. But in 2012, Cox’s amazing body began to falter. First, her feet began to swell. Then she developed an irregular heartbeat and severe cramping in both hands. At first, she thought her symptoms were stress-induced. Her mother had passed away a year earlier, and for 25 years, she had cared for her parents. Doctors told her that her prognosis for recovery was poor and that if her body did not respond to medication, she would need a heart transplant. Unwilling to “have my heart cut out of my body,” Cox examined everything in her life, from her diet and personal habits to her friendships. She dispensed with all negative thinking and became more aware of “the things that were stressing me” so that she could handle them more appropriately. A few months later, her heart rate had become more normal and she was reacclimatizing her body to the cold by moving her hands and arms in a kitchen sink filled with ice water. Six months later, she had completely recovered. Not only was she able to swim again, but she also loved it more deeply than ever before. Told in straightforward language straight from the heart, Cox’s story is a celebration of mindful living and a reminder that few things are ever permanently out of reach.