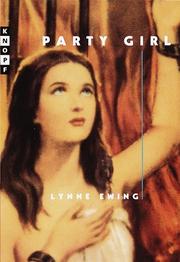 Ana and Kata have been friends since fourth grade, so close that they had become a part of one another. When they dance at the battle of the go-gos they move in perfect synchrony to the pounding beat, and nothing exists but the music and each other. Then Ana is gunned down by members of a rival gang, and Kata is torn between her desire for revenge and her yearning to “face out” and quit the life. In a relatively small number of pages, Ewing (Drive-By, 1996, etc.) captures the pulse and rhythm of the setting, from the Los Angeles neighborhood and snatches of conversation in Spanish, to the staccato footsteps of Kata and Ana in their hot pants and five-inch heels. The fast-paced narration features some riveting action and close-ups of a world where teenagers literally have no futures. Unfortunately, Ewing doesn’t give relationships, family situations, and emotions more than cursory psychological summaries; readers never feel, as they do in Gary Soto’s books, that they have slipped into the characters’ skins. Nevertheless, this is a gripping look at a fascinating, often ruthless, urban world. (Fiction. 12-14)