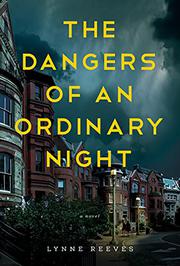 THE DANGERS OF AN ORDINARY NIGHT

Family counselor Reeves’ fourth novel is a three-act tragedy that peers beneath every parent’s worst nightmare and asks which of the statistically normal traumas underneath precipitated it.

Two days after best friends June Danforth and Natalie Carrington leave an audition at The Performing Arts High School of Boston and vanish, caretaker Charles Turner Stockbridge finds them on secluded Watties Beach, June dead of exposure, Tali still alive. Who kidnapped the 17-year-olds and left them to die? It would be nice to believe that the perp must be a drifter from outside their social circle, but Detective Fitz Jameson finds himself concentrating on several suspects unpleasantly close to the two young women: Stockbridge, who can’t explain why he found June, who died facedown, lying face up; Sam Wallace, a sophomore at Performing Arts who’s clearly its star actor; his stage mother, Ana, who’s resolved that the show must go on whatever the cost to Tali; insensitive director Greg Normand, whose reflexive response to any crisis is more bullying; and Zeke Carrington, Tali’s father, whose gambling addiction had beholden him to such seriously dangerous creditors that his wife, Nell, is considering divorce proceedings. Working with psychiatrist Dr. Cynthia Rawlins, who’s more than eager to quit her brutally taxing job of trauma counseling for a teaching job at Boston College, Fitz, who’s hiding a dark secret of his own, hunkers down to unearth the truth to the accompaniment of 27 chapter titles drawn from 27 plays.

Reeves’ uncommonly assured novel, by turns sensitive and scarifying, identifies an elusive target and hits it dead on.