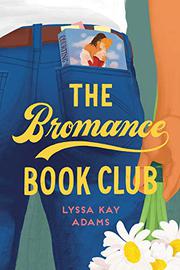 A baseball player attempts to heal his marriage with the help of his team’s romance-novel book club.

Gavin Scott has it all—a killer baseball career, twin daughters, and a devoted wife. But when Gavin discovers that Thea has been faking it in the bedroom, he’s distraught. The two have a blowup fight that ends with Gavin moving out and Thea asking for a divorce. Thea, however, has been faking it in more ways than one—even though she’s painting the picture of a happy baseball wife, she’s actually miserable in that role and wishes she could go back to school and pursue art. Between Gavin’s busy career and their young children, he hasn’t even noticed how unhappy she is, and she has no plans to tell him. When Gavin confides in his teammates that his marriage is in trouble, their advice comes from an unconventional source: romance novels, specifically Regency romances full of lords and countesses. Gavin is skeptical, but his teammates persist—the books help them understand what their wives are thinking and learn how to verbalize their feelings. Feeling desperate, Gavin decides to give them a chance, starting with a book called Courting the Countess. Surprisingly, the advice from his friends works—but what will Gavin do when he has to stop using the romance novel’s words and start using his own? Adams creates a refreshingly open group of male friends who talk about emotional labor, toxic masculinity, and how pumpkin spice lattes and romance novels are mocked because women like them. They’re also, however, hilariously and believably crude (case in point: a running joke involves one of Gavin’s teammate’s “digestive problems”). Alternating between Gavin's and Thea’s points of view, Adams never paints either character as the villain, instead pointing out how both spouses' lack of communication led to their current predicament. Also included are passages from Courting the Countess, a detail sure to please historical romance fans. Gavin and Thea’s story begins at such a low point that it’s hard to imagine how they’ll ever fall back in love, but their reconciliation is built so slowly and realistically that readers will be rooting for their happily-ever-after.