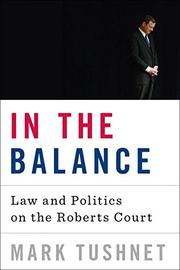 Constitutional jurisprudence involves reasoning from rules and precedent, the sort of legal analysis any lawyer or judge well understands, but it’s also shaded by a uniquely political dimension. By “politics,” Harvard Law School professor Tushnet (Why the Constitution Matters, 2011, etc.) means nothing so bald as the latest partisan dispatch from Democratic or Republican headquarters, but rather the “political structures and political visions” that produce nominees for the court, account for the principles and philosophies of the justices, shape arguments brought to the Supreme Court for adjudication, and frequently tip the balance in decisions. If the intellectual leadership of the Roberts Court passes from the chief justice to, say, Justice Elena Kagan—as it may if Obama is afforded future nominations—the shift will be attributable to this operation of politics on the court’s judgments. Tushnet teases out his argument with chapters devoted to the Roberts Court’s decisions on Obamacare, especially, and on other major cases dealing with affirmative action, gun rights, business interests, campaign finance and the First Amendment. The author is particularly good on the vetting process for justices, explaining how each party and president (with fingers crossed) approachs the selection of nominees. But the court, as Tushnet points out, plays a long game, and the mere passage of time can upset today’s careful political calculation. Things change, including the composition of political parties, the makeup of the court and the relations among the justices. Moreover, when politics and law mingle, as a number of the First Amendment decisions demonstrate, the “conservative versus liberal” narrative is not always so straightforward. Tushnet is an informed, experienced observer—he clerked for Justice Thurgood Marshall and owes his Harvard appointment to then-dean Kagan—and he proves a sure-footed guide in difficult terrain.

THE MOST DANGEROUS BRANCH
by David A. Kaplan
Nonfiction

THE COURT AND THE WORLD
by Stephen Breyer
Nonfiction