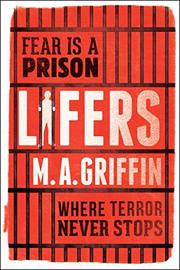 Preston’s longtime friend Alice has gone missing, vanishing in the middle of the night. When Preston goes searching the streets of Manchester for Alice he follows her trail to a mysterious scientific research facility that houses a portal to an alternate dimension. This alternate dimension has been fashioned into an experimental prison, with an unlucky group as the inaugural inmates, Alice included. Determined to return to the real world, Preston and the inmates band together to fight the bizarre forces that hold them prisoner. The book feels like Paper Towns and the Maze Runner series smashed together, with elements of Political Thriller 101 sprinkled throughout. The genre-bending premise is promising, but the characters and narrative never meet their own potentials. Alice is a blank, and Preston’s unnuanced drive to save her gets old. The trials and tribulations the gang encounters on their journey through dimensions feel like different levels to a video game, with clunky action set pieces and even chunkier exposition delivered between them. All of this leads to a climax that’s rushed and blunt.