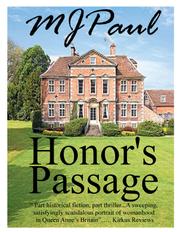 This novel centers around three young women and the scandals of their lives and how each in turn was affected or manipulated by the villainous Charles Brentwood. Honor Rashleigh witnesses a gruesome murder; Mendolyn Turnbull puts her trust in the wrong place after her elderly husband’s death; Kinna Tremayne finds herself betraying family; and Eloise Brentwood learns she has married the wrong man. Will Brentwood stop at nothing to slake his desires? Unlike in a traditional thriller, the identity of the primary villain is revealed in the first few pages, and most of the novel’s suspense comes from the reader’s agitation, knowing that the villain continues to fool those around him. And though Brentwood hold’s primary villain status, several other male characters commit wrongdoings against the women, so rather than focusing on discovering the identity of the murderer, the novel turns to illuminating the mistreatment of women during the era. Paul’s ability to provide commentary on the conventions of the time without losing sight of her entertaining soap-opera plot is impressive. The novel shines thanks to intriguing tidbits of historical research, particularly the painstaking descriptions of courtly attire. The characters, however, are sometimes imbued with slightly too modern sensibilities; at one point, the queen and Honor’s father gab over glasses of wine, as if they are old friends meeting in a college bar. Dialogue stumbles from time to time, and the novel’s prologue, in which three different characters alternate narration, is rather confusing. From Part I forward, the story is told in third person, which might lead readers to question the need for first person early on. These missteps are slight, however, and don’t terribly distract from the novel as a whole.