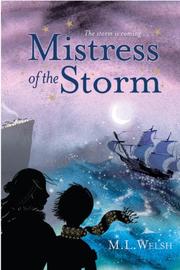 MISTRESS OF THE STORM

In Albion, there are places where stories become true. Unbeknownst to her, Verity Gallant is at the center of one such tale.

Verity is the unlikely heroine in a story that combines elements from Joan Aiken, Cornelia Funke and J.K. Rowling. Bullied at school, a misfit at home and ignorant of her family history, Verity is the only one suspicious of the “Grandmother” who invades her home to await the birth of Verity’s youngest sister. Welsh sets a brisk pace and delivers a nightmare-worthy villain as Verity, with help from her friends combined with some convenient revelations, discovers the horrifying truth. The intruder is the Mistress of the Storm, said to drink the blood of infants to survive. Verity’s grandfather, leader of the famed smugglers known as the Gentry, had been duped in the past by the murderous Mistress. In revenge, he created a tale in which Verity is fated to destroy her. The setting and cast of characters are so richly described readers will see the scenes, which cut from one to another, as if watching a movie. For those not content to stay on the surface, there are psychological depths to plumb, a point made in a regrettably didactic last chapter.

This is an exciting debut—with the promise of more to come—that will leave readers clinging to their seats, or masts, as the case may be.