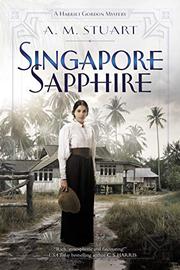 When young British widow Harriet Gordon arrives in Singapore in 1910, she’s hoping for a respite from her tumultuous and tragic past. But as she will find in this impressive, intelligent debut, her new life will pull her into mystery and murder.

Harriet lost her husband and young son to typhus in India, where her husband served as a doctor. Returning to London, she became a passionate supporter of the suffragette movement, even getting arrested and being force-fed in prison. Desperate for a fresh start, she's joined her brother, the Rev. Julian Edwards, in Singapore, where he is the head of a British boys’ school. She is also a typist for hire to earn extra money, and when she finds one of her clients and his servant brutally murdered, she has no idea of the evil and widespread criminal network she has stumbled upon. Admiring her astute observational skills and calm demeanor, the enigmatic, British-born Inspector Robert Curran (rumor has it he actually lives with a native woman) asks for her help. The author skillfully and seamlessly weaves actual people and events of the time with rich, multidimensional fictional characters. Stuart paints a vivid picture of Singapore, from its cultural clashes to its steamy climate. Especially impressive is Stuart’s ability to keep the plot moving and the characters believable without overdoing it or relying on clichés.

By the end of this sharp, satisfying novel, you’ll be anxious to find out what happens in the next adventure.