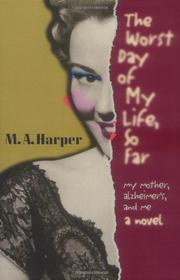 THE WORST DAY OF MY LIFE, SO FAR

My Mother, Alzheimer’s, and Me

Harper (For the Love of Robert E. Lee, 1992) unfolds a modern-day domestic nightmare in this account of a mother’s slow submersion beneath the murky waters of Alzheimer’s. The narrator, Jeanne Roth, is well into her own middle age when her mother, Velma, begins to lose her grip on reality. A Southern Belle from New Orleans, Velma is a woman of considerable charm and wit, and like all strong women she casts a long shadow across her daughter. For Jeanne, who broke up with her husband in New York just in time to move home to Louisiana and look after her increasingly helpless mother, the shadow is more than just memories of happier days gone by: it’s an unavoidable account one is forced to make of life in the face of impending death. The contrast between her life and her mother’s, her marriage and her parents’, her children and herself—all conspire to supply Jeanne with a new image of her self and her history.

Sentimental but not overly so: a story of real grace and power.