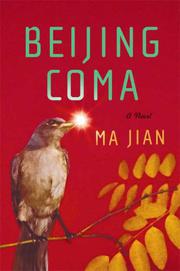 An unconscious protagonist is the central figure around whom a tapestry of political and personal histories is woven, in the latest from Chinese author Ma Jian (stories: Stick Out Your Tongue, 2006, etc.).

Dai Wei, a student at Beijing University, is active in the pro-democracy protest movement that met violent reprisals in the 1989 catastrophe in Tiananmen Square. Dai Wei is shot in the head, rendered comatose, given token medical treatment, then released into the custody of his widowed mother. Then, in a flexible narrative that moves smoothly between immobile death-in-life and the remembered circumstances of childhood and youth, Ma Jian recreates years of mounting tensions between idealistic youths and the agents of a government determined to stifle all difference and dissent. As Dai Wei’s body functions independently, his mind responds to news and gossip brought by a decade’s worth of visitors (e.g., former classmates who arrive to help “celebrate” his birthday), and revisits his brief, turbulent past. Heady arguments with passionately politicized fellow students are juxtaposed with plaintive glimpsed images of random sexual experiences and unfulfilled romantic relationships. Vacillating awareness of his mother’s embittered caretaking jostle against fragmentary memories of his late father (a stubbornly independent anticommunist, whose fate prefigured Dai Wei’s own). The novel is overlong, marred by Ma Jian’s tendency to abandon drama for extended argument (especially in scenes featuring student protestors). But the arguments are generally vigorous and compelling, and cohere into a rich context that explains the comatose Dai Wei’s deeply rooted will to live—and prepares for the ironic conclusion, in which this Asian Rip Van Winkle awakens, after a decade “lived” only in memory and imagination, on the cusp of the new millennium, into an altered world.