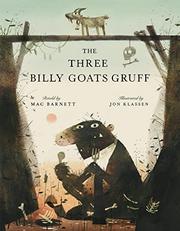 Fairy-tale fun for everyone. (Except trolls.)

Barnett and Klassen partner for a retelling of the classic folktale about a trio of variously sized goats (all named Gruff) and a troll whose greed ultimately leads to his downfall. The story has been told many times, but in this variation, Barnett shows off for his audience by giving the troll a substantial amount of dialogue, most of which rhymes: “I love goat! Let me count the ways. / Goat rump in a honey glaze. / Goat smoked, goat poached, a goat pot roast. / Goat smorgasbord! Goat smeared on toast! / A goat kale salad—hold the kale. / Goat escargot! (That’s goat plus snails.) / On goat I’ll dine, on goat I’ll sup. / You little goat, I’ll eat you up!” It’s amusing verbal play, and librarians and caregivers who love to read out loud will enjoy hamming it up, although it may lessen the scary impact of the character. Likewise, the artwork, created in ink, watercolor, and graphite and compiled digitally, is pure Klassen, and the brown, green, and blue tones combine into an earthy setting where the ratlike troll (sans tail) fits in perfectly. But the visual reveal of the third billy goat takes a bit of oomph out of the story, as readers will be able to anticipate that this troll won’t be having goat strudel anytime soon. Fans of either Barnett or Klassen will love this retelling, but librarians won’t be sending their Paul Galdone or Jerry Pinkney retellings out to pasture just yet. (This book was reviewed digitally.)