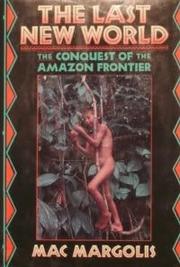 The Conquest of the Amazon Frontier

A well-organized, carefully researched, and fascinating study of the devastation of the Amazon rain forest; by Margolis, a Newsweek correspondent for eight years in Brazil. Margolis devotes each chapter to a consideration of a particular economic enterprise (mining, logging, ranching, farming) or social issue (migrant activity, union organization, Indian affairs, the Japanese presence), and describes how these matters are being addressed by both the Brazilian government and the environmental community at large. He provides a concise historical overview, taking the reader through the various stages of Western expansion in Brazil, grounded first in 19th-century Romanticism, then fueled by nationalist sentiments in the early 20th century, and culminating today in Brazil's quest for recognition as a global economic power. Margolis's familiarity with and love for the country serves him exceptionally well in reviewing the present-day scenario; his book's greatest strength lies in the wealth of detail realized through on-site interviews, personal anecdotes, and intimate, almost lyrical, descriptions of place. Although the tone is nonpartisan throughout—zealots on both sides of the debate are taken to task—the author's sympathies clearly lie with the innocent victims of rain-forest destruction, particularly Indians and peasants, and with the ``unsung heroes'' who are working toward the middle-ground solution of sustainable development. Homage is paid to agronomists, pharmacologists, responsible farmers, creative entrepreneurs, and, especially, the extractor/collectors— harvesters of rubber, nuts, and fruit who, under the inspired leadership of the late Chico Mendes, have induced the Brazilian government to set aside millions of forest acres for use as ``extractive reserves.'' A compelling account of the relentless incursion into one of the earth's last frontiers, and a determined call for calm and reason amidst the clamor of increasingly belligerent antagonists. (Photographs and maps—not seen.)