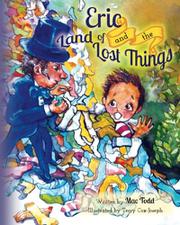 Eric and the Land of Lost Things

A 5-year-old boy discovers a magical land just beyond his backyard in this debut picture book for young children.
After receiving permission from his mother, Eric—who had his birthday the previous day—takes his favorite gift, a new soccer ball, out to the backyard. He wants to excel in the sport the way his older sister, Alexandra, does, so he gives the ball such a hard kick that it travels over the goal and into a hedge. Despite the hedge’s scary darkness, he bravely goes after it. But instead of the ball, he finds a magical land with a green sky. The first thing he sees is a short man in a blue tuxedo and top hat who’s searching for pairs in a multicolored mountain of socks. Eric politely asks the little man if he’s seen his soccer ball and soon learns that the man calls himself The Keeper and that they’re in the magical place where all lost things go. When another two dozen socks fall out of the sky on The Keeper’s head, the man expresses his frustration with trying to pair them all. Eric shares his mother’s wisdom that only one sock from each pair gets lost, which would make pairing them impossible. With this realization, The Keeper collapses but quickly recovers. He happily decides that it would be more useful to sort lost books and thanks Eric for his insight. As they approach the mountain of books, Eric finds his soccer ball, says goodbye to The Keeper, who invites him to return, and then heads home to take his nap. Although the story is simple and short, it provides a satisfying sequence of events and several lessons: asking permission, making polite requests, and being responsible and kind. It leaves open imaginative possibilities for its audience: The youngest readers may be engaged by finding socks or books of different colors and patterns, while older children may imagine what else they could find in the Land of Lost Things and what will happen when Eric returns. The colorful, painted illustrations clearly distinguish the ordinary world of Eric’s home from the magical land, mirror the story’s emotional ups and downs, and invite exploration, although adult readers may notice that Mr. Keeper’s facial features are somewhat inconsistent and that Eric’s cheeks sometimes seem excessively red.
A simple, fun encounter with magic for young children.