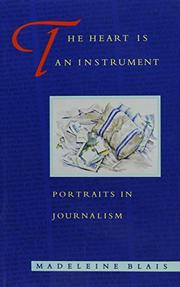 THE HEART IS AN INSTRUMENT

Fifteen brief but sensitive vignettes and a longer epilogue by Blais (Journalism/Univ. of Mass. at Amherst), a Pulitzer-winning former writer for the Miami Herald. Blais focuses primarily on ``outsiders''—a schizophrenic woman struggling to gain stability, a teenaged murderer, an 83- year-old WW I vet seeking to have his dishonorable discharge reversed. One of the most successful pieces here, reprinted from The Washington Post, concerns Carol Fennelly, a social activist who continues to head a shelter for the homeless even though her fellow activist and longtime lover Mitch hanged himself. Blais captures in haunting images the woman's strength, her sense of loss, her vulnerability: Fennelly, Blais tells us, speaks of an earlier marriage in which her husband asked, ``Why can't you be more obedient?'' ``Dogs are obedient!'' Fennelly replied, dropping to all fours and barking and tugging at his pants cuff with her teeth. But when Blais depicts a subject who is ``successful,'' as, for example, in a portrait of an anonymous $80-an-hour therapist whose life is a manic attempt to juggle career and motherhood, her plans misfire. Rather than seeing the woman as admirable, as Blais apparently intends, we perceive her as self-absorbed and misdirected; in fact, the author admits in an afterword that this particular article elicited a nearly universal negative response when it appeared. Nor is Blais much more successful in her interview with Tennessee Williams, offering little more than a rehash of the playwright's oft-told tales. Discussing her own work, Blais writes, ``I am most often drawn to people walking the edge, curiously undefeated.'' It's in portraying these marginal lives that she's most effective. (Illustrations—not seen.)