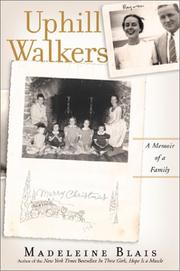 A Memoir of a Family

A disjointed memoir of an Irish-American childhood in rural Massachusetts during the 1950s and ’60s.

In the first half of her narrative, newcomer Blais offers recollections of her father (a successful physician who died of cancer when she was five) and recounts anecdotes from her experiences at a Catholic school. Her mother, Maureen, was reluctant to remarry or work outside the home after her husband’s death, so she raised her six children on the proceeds of her husband’s life insurance policy and the charity of relatives. They didn’t starve, but they had to resign themselves to eating “cheaper tuna” and a dessert they called “dogfood.” As the eldest sister, the author was also the cruelest—shamelessly given to tormenting her sister Jacqueline (she defaced her diary, mocked her for being homesick at summer camp, and forced her to study the catechism in the dark). Blais feared only her eldest brother Raymond, a temperamental high-school dropout. After Raymond was mysteriously discharged from the Air Force, he began to show signs of mental illness and he was dependent on psychiatric drugs for the remainder of his life. His daily battles with his affliction soon come to dominate the narrative, and the author’s other three siblings remain more or less faceless by comparison. There are other characters of importance in this story (the author’s husband, for one), but they are all more or less overlooked as the narrative jumps through decades and bypasses significant events.

An unfocused account that is intermittently moving but terribly unbalanced.