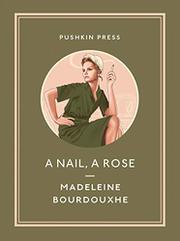 A NAIL, A ROSE

Stories about women that describe the everyday as well as the transcendent.

In the first story in this fine collection, a woman is walking home alone in the dark. Then a man hits her over the head from behind. It’s a spectacular act of violence, but the story doesn’t go in any direction you might reasonably expect. Instead, the woman, Irene, turns around and starts to speak with her assailant. “Don’t shout so loud,” she tells him, “someone might hear us.” “What on earth were you up to,” he asks, “all alone in the dark?” Then they divvy up the contents of her purse. They part on friendly terms. The story was first published in 1949; Bourdouxhe (Marie, 2001), who wrote in French, lived in Brussels and in Paris, where she befriended Simone de Beauvoir, among other luminaries. Her stories typically focus on women: their inner lives as well as the mundane details that occupy their days. In “Louise,” a maid borrows her employer’s nice blue coat for her evening off. In “Blanche,” a housewife daydreams as she washes the dishes and picks leeks in the garden. In every story, the banal becomes intimately intertwined with the sublime. Alone in the woods, Blanche feels a sense of peace. “Not that it was a happy or easy peace—nothing was happy or easy, either inside or outside her; it was a fiery peace, a peace that meant all is well.” Bourdouxhe’s prose is crisp, precise, and always understated. She’s a marvelous writer with an entirely unique vision of the world.

A gorgeous collection from a writer too often overlooked.