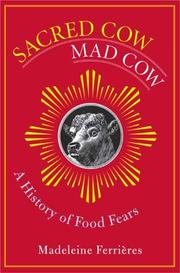 A History of Food Fears

An impressively researched addition to the Arts and Traditions of the Table series.

French historian Ferrières (Social History/Univ. of Avignon) has dug deep and wide in her exploration of anxieties about food: agricultural statistics, medical and veterinary journals, public health records, royal decrees, city and town ordinances and cookery manuals. Human fears about food, she notes, fall into two categories: concern about quantity and worry over quality. Her focus here is on the latter. Although she discusses Upton Sinclair’s The Jungle and the passage of the Pure Food and Drug Act, she gives the United States relatively short shrift, for Ferrières’s emphasis is on European, especially French, history. Her research turns up some fascinating facts, such as that in 14th-century Europe, horror of leprosy led to the erroneous belief that one could get it by consuming “leprous pork”; later, cabbage, cheese, beer and gamay grapes were also suspect. One bizarre tale involves a lawsuit in 1668 between Paris bakers and innkeepers in which bakery bread was alleged to be unhealthy because it was made with yeast; to settle the question, doctors weighed in, as did public prosecutors, judges, police and even parliament. European reactions—suspicion, aversion, phobia—of unfamiliar foods encountered in the New World are explored, as are some wild food rumors; e.g., English porter is made stronger than European beers by the addition of a skinned dog to the vat. She shows how food fears changed as industrialization distanced the consumer from the producer, examines the gap between scientific knowledge and political power in response to food risks and looks at the role of individual responsibility for food safety.