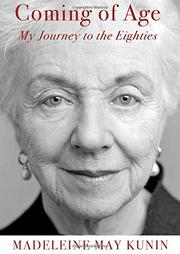 My Journey to the Eighties

by Madeleine May Kunin

This memoir includes anecdotes, self-analysis, and original poetry from a Vermont politician and author as she embarks on her eighth decade.

Kunin (Living a Political Life, 1994, etc.) broke the rules in a major way more than two decades ago as Vermont’s first elected female governor. She also served as deputy secretary of education during President Bill Clinton’s administration and spent three years as the United States ambassador to Switzerland. But not even this dynamo can reverse the aging process. In her fourth book, the author looks ahead to age 84 and beyond. She reflects on the late-in-life romance with her second husband, John, whom she met in her 70s and his 80s. (After they agreed to get married, John told Kunin, “I can give you ten years,” and she mused, “That seemed like forever.”) When John was stricken with health problems and subsequently confined to a wheelchair, he and Kunin made the decision to sell their condo and move to a cottage in a retirement village. As the author cared for her ailing husband and packed up the remains of their old life, she thought about her career and relationships, not just with John, but also with her brother, Edgar, who was a thriving politician and writer before he died. Kunin intersperses ruminations and stories of daily life with John with original poetry contemplating the veins in her hands and the arrival of autumn. A veteran of working in government as well as writing books, the author chooses her words carefully, using prose that is short and to the point but no less powerful. Her poetry is just as lovely, particularly “Can There Be More to Say,” a look at a morning marital conversation. Kunin’s take on “coming of age” as an elderly woman rather than an adolescent is unique and should appeal to readers young and old. Her tales of her mother, a Jewish immigrant who brought her two children to America after her husband’s suicide, are both poignant and indicative of the success stories Kunin and Edgar would become in adulthood.

A beautifully written and emotionally sound look back—and forward—from a woman who has broken the glass ceiling and lived to write about it.