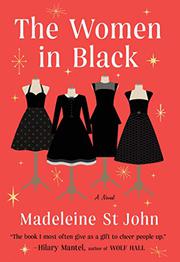 THE WOMEN IN BLACK

In this witty little gem of a tale, reminiscent of Barbara Pym and Muriel Spark, three women working at a posh department store see their lives turn important corners while a fourth lends a helping hand.

“At the end of a hot November day Miss Baines and Mrs. Williams of the Ladies’ Frocks Department at Goode’s were complaining to each other while they changed out of their black frocks before going home.” The opening sentence of Australian novelist St John’s (A Pure Clear Light, 1996, etc.) first novel, originally published in 1993, instantly transports readers back to a more genteel era. The setting is Sydney, the era post–World War II, and the cast of characters a mix of middle- and working-class locals and bohemian refugees. Teenager Lesley Miles, an aspiring poet who prefers to be called Lisa, lands a Christmas job at Goode’s while waiting to see if she has passed the Leaving Certificate exam and qualified for a university place. Employed partly in Ladies’ Cocktail, she is also seconded to Model Gowns, where she meets Magda ("no one could even try to pronounce her frightful Continental surname"), a formidable, sensuous, shrewd figure whose social gatherings will introduce Lisa and Fay Baines to a new world of sophistication and possibility. Patty Williams, meanwhile, is the character with the most intractable problem, namely her husband, Frank, whose dim libido leaves her despairing at the unlikelihood of children. St John, who died in 2006, has created a meld of New World naiveté and old European wisdom, its simplicity punctured with enduring savvy: “The point is they are happy together now. It is the only possible beginning. The middle and end must take care of themselves as they always do. Or not, as the case may be.”